CHICAGO, IL (April 12, 2016) – With the sports world focused on Chicago as host of the NFL Draft for the second consecutive year, former Daytona 500 Champion Jamie McMurray is again partnering with NFL player Melvin Gordon to co-host the Stars and Strikes Celebrity Bowling Classic on April 26 at Lucky Strike Chicago to drive awareness and funding for the Jamie McMurray Foundation. 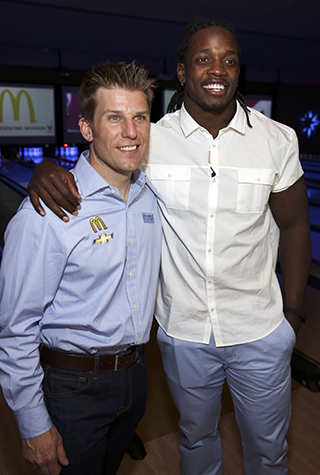 “We had an overwhelming response last year, so we decided to do it again and invite even more of the football community to join our effort to support children and families in need,” said Gordon, the former University of Wisconsin Badger star who was drafted 15th overall last year by the San Diego Chargers.

McMurray, driver of the No. 1 McDonald’s/Cessna Chevrolet for Chip Ganassi Racing in the NASCAR Sprint Cup Series, has been sponsored by McDonald’s since 2010 when he became one of only three drivers to win the Daytona 500 and Brickyard 400 in the same season.

McMurray plans to work closely with McDonald’s to deliver 100 percent of the proceeds from the Stars and Strikes event to local charities through his foundation.

In addition to McDonald’s, other Chip Ganassi Racing No. 1 car sponsors that are supporting Stars and Strikes include Credit One Bank, Cessna and Florida Hospital. Other major event partners include NIKE, GoBowling.com, Jockey International and Chicagoland Speedway.

About Jamie McMurray Foundation
The Jamie McMurray Foundation (JMF), a non-profit, 501 (c) (3) corporation, promotes awareness of, and raises funding for, the research, education, and support for individuals and families afflicted with autism. JMF is dedicated to bringing the financial backing and support of the NASCAR community, together with the passion and commitment of the autism community, to promote better understanding of this challenging disability. To donate, visit http://www.jamiemcmurray.com/foundation/.